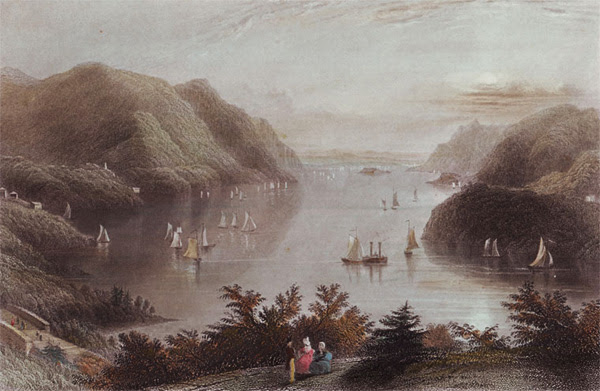 From a 500-acre estate to a rustic cabin in the woods,
from the Hudson River School to the American Revolution:
These are the events, people and places that make our Hudson River Heritage so rich.

The above print, "View from West Point" is from a steel engraving by W. H. Bartlett, c. 1850
(from the author's collection).
Posted by FYI World Media at 6:42 PM

The first brickmaking in the town was at Jones Point, then Cholwills, as early as 1830, when we read that a partnership agreement between J no. Burgess, Jr., and Elizabeth Norton was entered into for the manufacture of brick at that place.

The first brick yard on the present Tomkins property was erected in the spring of 1843 by Samuel Brewster for his tenant, Zalmon Nickerson. This yard was located about where the southerly half of Reilley & Clark’s plant now stands. Bradley Keesler began manufacturing brick as another tenant of Samuel Brewster, occupying the yard where the Acme Brick Company is now located in 1845. These yards were successful and were followed by one erected for and operated by Wm. R. Knapp in 1851, and located immediately north of the Nickerson plant. The same year saw David Mackey beginning a yard on his recently acquired lands north of the Keesler yard, and George Knapp and James Conklin acquired the Nickerson plant.

In 1855 another yard was erected about on the site of the present Reiley & Rose plant. In 1856 Daniel Tomkins, then about to retire from the Tomkins Cove Lime Company, purchased the Brewster property at Stony Point and enlarging the capacity of the above mentioned yards, began the successful manufacture of brick on the larger scale which has continued to the present day. He early associated with himself his sons, Watson and Frederic, under the name of D. Tomkins & Sons. Although the founder of the firm and one of the sons (Frederic) are dead, the firm still exists as landlord of the property. The tenants are the firms of Reilley & Clark, with a capacity of 15,000,000 per annum, employing ninety men; Reiley & Rose, with a capacity of 10,000,000 and employing seventy-five men, and the Acme Brick Company, with a capacity of 3,000,000 and employing sixty men.

No one thing has done so much for Stony Point Village as has the Tomkins brick yard interests. Pride and care in the manufacture quickly had its reward in the excellent reputation always enjoyed in the New York, Newark and Eastern markets by Tomkins and Stony Point brick, a reputation well deserved and which has continued to the present day.